Getting more mobile with the lightweight TravelScoot electric scooter 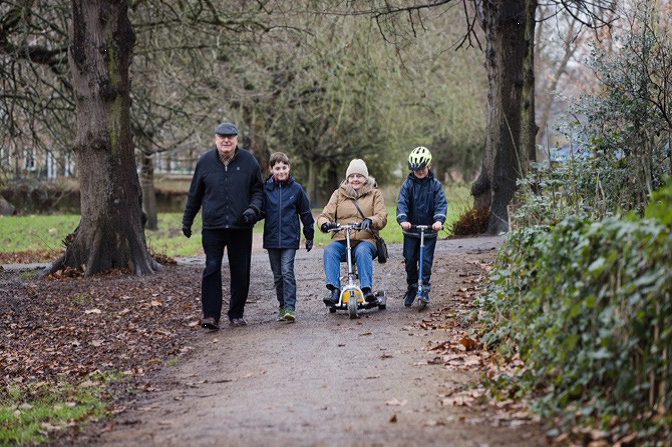 The TravelScoot is billed as the world’s lightest mobility scooter. It’s about to arrive in the UK from the US, and we were given the chance to test it out before its launch.

Let’s be clear from the start. This is not a full-time mobility scooter for people with long-term disabilities. This is a helpmate for those who are generally mobile but could do with some electric wheels to let them go faster and further. We can see it being particularly useful when someone is out and about with friends and family and just wants to keep up. 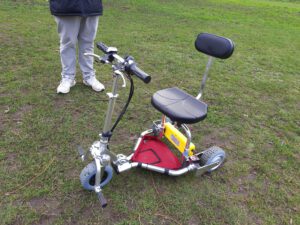 How to describe the Travel Scoot? Imagine an electric tricycle with a motorbike throttle and bicycle brakes, with the option of a tandem trailer for a second rider. In this case a picture probably does speak a thousand words. (Excuse the quality of our live-action photography though.)

The scooter arrives in several pieces. There’s a main section with the base, back wheels and front fork with handlebars that fold down to make it more portable. There are then 2 parts that form the seat. And also two mysterious metal rings that will fall off and roll away however hard you try to stop them. All of these parts fit, with a bit of effort, into the canvas bag that’s supplied with the scooter.

On the whole the scooter is very easy to put together. The folding mechanism is key and this all depends on a spring on the front fork. We did find this spring hard to work in the beginning. (In fact when it did finally give way it was a bit of a surprise and the handlebars hit me on the face on the way down. No damage done though and the spring is now working perfectly.)

You will probably be putting the scooter together on the ground, so some flexibility and strength is needed.

Where can you take it? 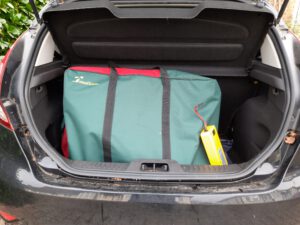 The scooter itself weighs in at 13 kg, making it reasonably easy to lift in an out of a car boot. Leave the rechargeable battery in the scooter and it becomes a total of 14.8kg, which does make it harder to lift, but it’s fairly straightforward to remove and carry the battery separately.

The scooter has potential for holidays. The company tells us that it fits through the doorways on a cruise ship, making it a good little runner to get around on that holiday. It’s also suggested that the scooter can be folded up and taken on board a plane in the same way that pushchairs are accepted. The battery would have to be managed separately though. Check with the airline about their individual rules.

Where did we test it?

We have a lot of riverside around here but not many hills. So our testing was in car parks, on tow paths, and across grass.

We found the controls very easy to master, and the scooter ran smoothly forwards and in reverse on the flat and up and down some gentle slopes. It had been raining but we avoided the really muddy terrain. Driving through small puddles to wash the wheels worked a treat though.

The only concern I had was around travelling on sideways sloping surfaces. I just felt a little less confident here, but there were no real signs that I was about to tip over. Generally, I recommend reading the FAQs on the website for advice on suitable terrain and precautions to take against damage.

Then we added the trailer 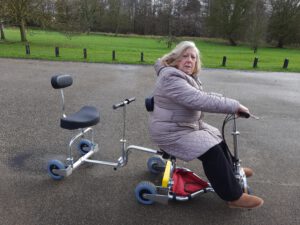 There’s an optional trailer that can be used for a passenger or potentially for cargo that is easy to put together and attach to the scooter. We tried it out on a level car park surface with two people, and were surprised that there was no obvious loss of power. That certainly may not be true on hills and more difficult terrain.

Going out with the scooter turned out to be a very social activity. Perhaps the fact that we were clearly having fun made the difference, but we found ourselves in conversation with a number of people who thought it looked like an excellent idea.

The scooter does collect mud and small stones easily. We ended up keeping in it our hallway for several days until the weather was good enough to take it outside and give it a clean.

Also, as I managed to demonstrate while reviewing the scooter, it is really important that you remember to take the battery with you.

There is a one-year guarantee on the scooter, and under the warranty the company will collect the scooter at its expense. Any repairs required are carried out in Watford, although the company claims this is rarely needed. There are plenty of helpful videos on the website to help you carry out your own regular maintenance. Servicing and repairs may be an area that needs exploring before making a purchase, just for peace of mind.

The Travel Scoot is a great idea for those who want to go further or a bit faster than their own legs will carry them. It’s not the right transport for anyone with more significant disabilities. It’s fast enough to keep up, has a good turning circle, and feels safe on the right surfaces. You can try before you buy, as long as you try it out indoors and return it within a week.

It’s a particularly good solution for anyone who’s not happy about allowing a family member or friend to push them around in a wheelchair. Using the Travel Scoot means that the individual can stay in control, and that’s important for many of us.

Would it work for those with cognitive decline? My co-reviewer’s mother has mild dementia but would probably be able to cope with learning how to control the scooter. It’s a fine line though.

Would we use it ourselves in due course? Definitely, says one of my co-reviewers. Quite probably, say the rest of us.

Advertised price is £2,399.00. More information on the Travel Scoot site.