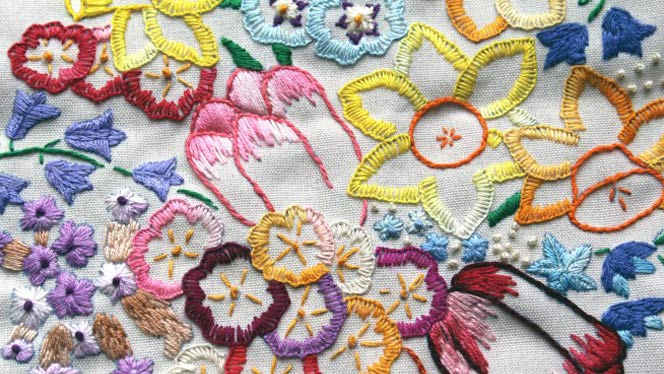 A chance discovery by textile artist Deirdre Nelson has led to a valuable therapy for dementia patients in the form of napkin folding.

Whilst creating artworks for Brunelcare’s new Saffron Gardens dementia care home Deirdre noticed that residents were often fascinated by the textured edges of items. In particular they would handle and explore the napkins they used at meal times.

One resident would tie napkins together to carry her possessions whilst another used napkins as a vase for flowers. A napkin became more than just a napkin.

Deirdre began to recognise the hidden potential in a napkin and started to develop a new project that is set to make meal times more exciting for dementia sufferers.

The Napkin Project is a collaborative venture between Deirdre and Willis Newson, a specialist arts and health consultants, who’s running the programme funded by Arts Council England and Bristol City Council.

More than 250 people have taken part in the project using their embroidery skills to decorate a blank napkin, creating something beautiful to inspire people living with dementia. People from all over the UK took part regardless of experience, sharing their creations with family and friends as generations have come together to stitch and sew.

Those who’ve lost loved ones to dementia have been eager to become a part of the project with one volunteer embroiderer remarking “We have lost one family member to dementia and have another who is also suffering so we know how little things can help. I haven’t embroidered for many years and my daughters have yet to learn so it will be a lovely process for all of us.”

Raising awareness of dementia has been just one aim of this project. The Napkin Project was created as a way to communicate how important creativity can be for people living with dementia and for those who care for them. Patient-centric care relies on creative resources to place the feelings of the individual at the heart of everything.

One napkin contributor shared their thoughts about this new arts initiative saying that they “found the basis observation of the project fascinating”. They went on to share how their father, who suffers from dementia, often plays “with the edges of things – be it fabric or a table edge” and as a result they now “leave a cotton hankie (brightly patterned Liberty squares) for him” as a “textile reminder” that they’ve visited him.

Recent research by Arts 4 Dementia (A4D) strongly suggests that creative stimulation via various art mediums can be a powerful tool – enabling dementia sufferers to reconnect socially and reengage with family members. A4D found that 91% of people with dementia who participated in an art workshop felt better in themselves with 60% remaining energised for a week or longer.

With 800,000 people living with dementia in the UK, a figure that’s set to rise to over 1 million by 2021 according to the Alzheimer’s Society, a creative approach needs to be exercised alongside a clinical one in order to maximise the effectiveness of treatment for dementia. Even an activity as simple as eating lunch can be beneficial in terms of social interaction as well as mental stimulation.

The benefits of working creatively apply equally to care home staff as well as to those with dementia. Brunelcare, its staff and residents at Saffron Gardens will be receiving over 250 finished napkins at an event later this year in support of Deirdre’s on going work at the care home.

This positive and inspiring project has seen a huge support from the public and it’s our hope that people will be encouraged to contribute creative solutions solving the issues that surround care for the UK’s ageing population.