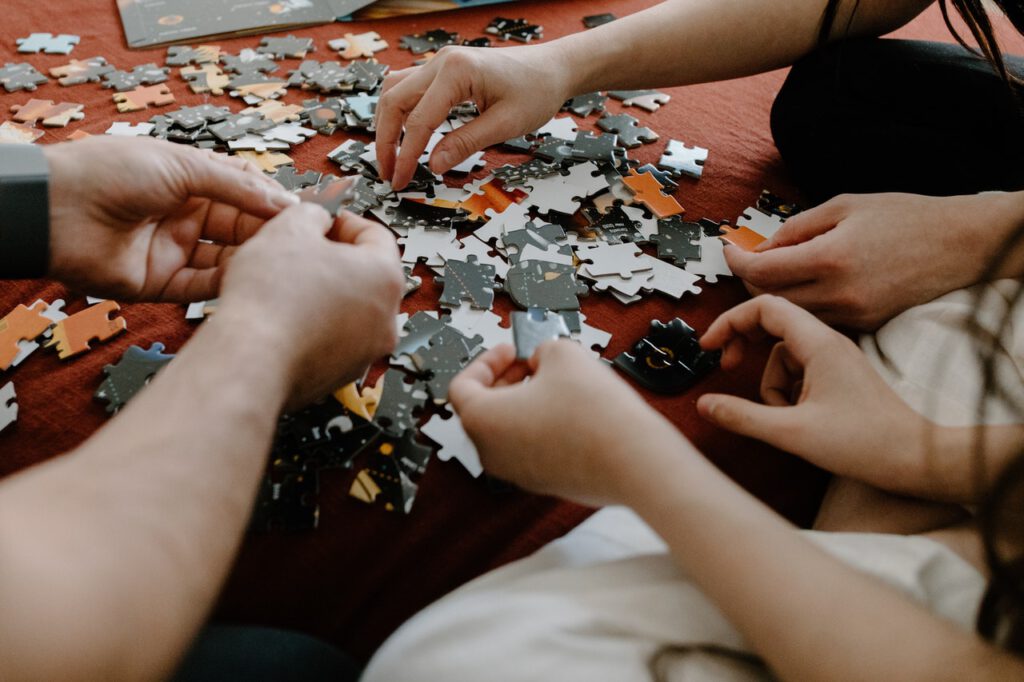 Age can bring a slowdown in cognitive abilities. Playing games is a great way to keep minds active. It’s also a good way to keep people connected, reducing the risk of loneliness.

There are different types of games that seniors can play, and there is not one perfect game for all. Which games work best depends on the individual. Games with physical elements may work well for some but not for others. The same is true of games with complex strategies and time limits, which may frustrate those with reducing cognitive ability.

For some, the onset of dementia makes brain games more challenging, but there are still some traditional games and puzzles that can work, and others that have been designed specifically for those with impaired cognitive function.

Bearing all of these in mind, we have compiled a list of games that are ideal for seniors’ minds and provide a good level of social interaction.

This board game is practically built around communication and was created for seniors, especially those in the early stages of dementia.

It features several questions meant to help older adults strengthen their connections to some of their dearest memories. It is straightforward to play.

This game is also an excellent way to get people to interact with each other, get to know themselves, share their stories, and start conversations that may never have happened otherwise.

The game costs around £32 and is available from a variety of suppliers.

Word games help seniors to keep their minds active and sharp as they age further. Scrabble is one of the best available word games. It is recommended for seniors in facilities like assisted living communities and has been played for years.

There are versions of the games with small letters and tiles that may not work for everybody, but playing Scrabble regularly may help slow down cognitive impairment progress in older adults who love the game.

Solving jigsaws involves the brain’s two hemispheres because puzzles require both logic and creativity. Jigsaws can help support short-term memory and visual recognition as well as concentration and relaxation.

There are jigsaws available that are more suitable for those with physical challenges such as impaired vision or arthritis.

Choosing the image is all part of the enjoyment, and the puzzle could even be one made from a picture of a memory that they cherish.

PicLink is perhaps the best game for seniors who struggle with most of the games listed here because they find them frustrating or too complex. This board game is straightforward and fun, and is one of the very few games that have been designed specifically for people with dementia.

The game is based around a set of photo tiles divided into groups based on six subject areas, such as colours, food and animals. It has a different difficulty level that can be adjusted easily by using a smaller set of tiles.

The game can be found from a number of retailers and costs around £30.

One of the best ways to help seniors sharpen their recollection is to play Trivial Pursuit.

It might be frustrating for seniors who are struggling with memory loss, but playing in teams could relieve the pressure and let everyone enjoy making a contribution.

Chess and draughts are two of the best board games for seniors. They are good for the social experience and brain training and are also very accessible.

Chess is particularly an engaging game, and it demands a lot of strategic thinking and concentration.

For those who struggle with the complexities of chess, an excellent alternative is draughts. It has much simpler mechanics and rules and is not as complex or requires much strategic thinking as chess.

Card games provide seniors with some of the best playing experiences. There are several types of games that can be played with a deck of cards. This variety makes it possible to choose the most appropriate match for the cognitive ability and skill levels of the seniors playing it.

They can play a memory game in which cards are laid out on the table, and the playing seniors turn over two cards at a time. If they turn over a matching pair, then they get to keep the cards. There are also several old favourites such as Rummy, Cribbage, Pinochle, Hearts, and Solitaire.

Social interactions and companionships are essential for seniors at that stage of their lives, and having them play these games together gives them that feeling back. There are many other games that seniors can play that are equally beneficial as these are a few. These games help their physical, mental, and emotional health.

Photo by Tara Winstead from Pexels