Banishing the fear of falling with reflexology 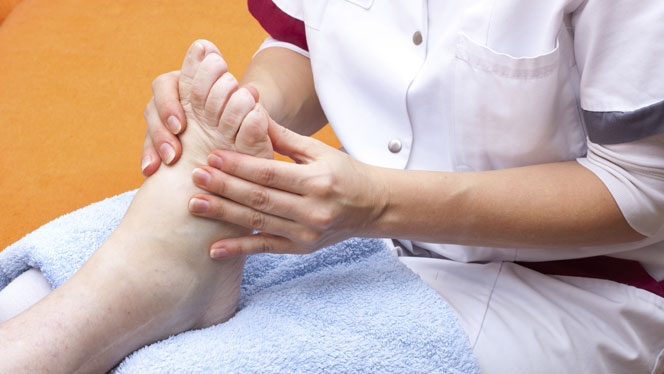 This week’s storyteller is Amanda.

Amanda Weller tells us how her reflexology knowledge has helped a friend, who’d become fearful of falling, to take back control of her feet and start living again.

I have a lovely ninety-year-old friend who lives in Cornwall. She loves reflexology but I don’t get my hands on her very frequently due to the distance.

Eighteen months ago, she was incredibly fit and strong, easily able to out-dig me in the garden and far more mentally alert than I will ever be! Then one day, while waiting for the bus stop, she fainted and hit her head on a stone wall.

Since then, she has had feelings of dizziness when she moved, and her legs and feet wouldn’t do what she wanted them to. Fear of not being steady or in control of her movements resulted in her doing less and less.

My brother-in-law drove down to collect her and she came up to stay with my sister and family for a couple of weeks over Easter. Despite knowing how she was feeling from our telephone chats, I have to say that I was utterly shocked when I saw her. She resolutely refused to move from the sitting room to the kitchen unless she absolutely had to. When she did stand up, she was hunched and she shuffled along uncertainly, walking stick in one hand, her other arm supported by someone else. Her feet were a tight squeeze in her shoes and she felt as though her feet didn’t belong to her.

I did four reflexology treatments on her over the course of the two weeks. She also had two cranial osteopathy treatments with someone else.

The first time I worked on her, she was confused, not realising that she had to take her shoes and socks off and get into my reflexology chair. Her ankles and lower legs were solid, with very little flexibility and her toes were stiff and unyielding.

By the end of her four sessions with me, she had flexible ankles and toes and her shoes looked like boats on her. She delighted in standing on one leg while demonstrating to us how much she could wiggle the other ankle. She felt like her feet belonged to her again. She was standing straighter and, although still dizzy when moving, her head no longer felt heavy on her shoulders. Not only that, the day before she left she went out shopping.

Her whole outlook was much more positive and confident and she even suggested coming up by train next time, as she did until eighteen months ago.

My friend has always really enjoyed reflexology and what I particularly love about this story is that it so brilliantly illustrates how our amazing bodies are always trying to get into the best possible state, no matter what age we are.

Sometimes stress and fears can really block us, and if something as simple as “twiddling my toes”, as she called it, can help remind our bodies/minds to get back on track, I just think why not?

We discussed what an extraordinary change there had been in her over the course of the two weeks and that perhaps it might be worthwhile trying to find a reflexologist when she got home. Well, after my brother-in-law had dropped her home she boiled the kettle and sat down with the new parish mag. Lo and behold, there was a reflexologist in her village who she had not known of before. So, before she had even unpacked, she rang her and booked her in. She told me “Well, I don’t use my pension for much else, so I thought I would”. She is very happy with her local reflexologist and I am absolutely delighted that she has been so pro-active in maintaining her health and well-being.

Amanda and When They Get Older recently featured in Innov-age Magazine Issue 2 Pages 16 and 17 – take a look for the full story.