How dad’s humour eased his death 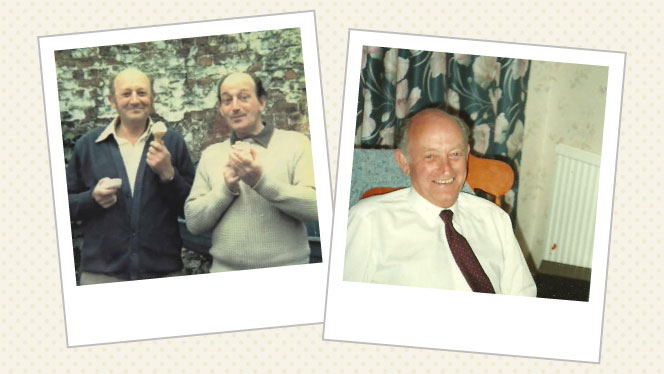 This week’s storyteller is Gill.

A terminal illness is hard for anyone to come to terms with but when Gill’s dad was diagnosed with Motor Neurone Disease he dealt with it in a surprising way – through humour. She tells us how his jokes eased the pain of his passing and ensured his family remained positive.

In 1994, my then husband, daughters and I moved back from France, and spent Christmas with my parents in Yorkshire for the first time ever – precious timing for which I shall always be grateful.

It was early in January 1995 that the phone call came. My mother was in shock. “He was so thin! When the doctor asked him to take his shirt off, he was so thin! And I had never noticed!” she repeated the words over and over. It took some time before she told me that dad had been diagnosed with Motor Neurone Disease. He hadn’t heard of it, but mum had gasped, “Is that what David Niven had?” Her blood turned to ice when the doctor nodded gravely. Mum never recovered from this conversation – indeed years later she would still refer to it during the ramblings of dementia.

My father, who had lost siblings at an early age, lived with a lifelong dread of getting cancer. The thought haunted him. I had no idea how he would cope with being told he was going to die. I hadn’t counted on his irrepressible, and newly ghoulish, humour.

I spoke to him the next day, and checked if he understood that it was terminal. “Aye lass, but at least it’s not cancer!” he chuckled. He saw this as a victory.

I knew that the usual prognosis was about 3 years, but when I visited I realised that dad was going to die very soon. In February I took our small daughters to see him, saying, “You need to make sure you say goodbye to Grandpa and have a lovely cuddle.” And they did. He died a month later.

At the time I was a clergy wife. Death was a normal part of life – funerals, the bereaved, undertakers phoning the house – and so it came naturally to me to cope by trying to help my siblings through this awful time. The hardest part was reminding myself that mum needed to do grief her own way – and she chose a hard path. A fervent Christian, she clung to the hope that God would heal dad. An equally fervent eccentric, she would express this by holding platefuls of wonderful smelling food (which he couldn’t swallow) under his nose and urging him to eat. At times I felt angry with her, at others I wanted to weep and hold her close, but sadly our relationship had never allowed for that. I was the baby of my family at 34, and dad had always been my parent.

I gently advised my brothers to visit and do the very un-Blokey thing of telling dad they loved him, which they did. We did not speak much about death, but nor was it taboo. We put dad on the sofa in the living room near his beloved piano, and after a lifetime of being a workaholic, he learned what we now call Mindfulness. One day he pointed out to me the beauty of some little stained glass panels which had been my favourite thing in the house since I was a tiny child. “I’ve never noticed those before!” he said in tones of wonder.

I was exhausted. Every other day I walked into town to collect morphine from the chemist, tears rolling down my face. But I was grateful for the many tears I cried. I have always believed that grief is the price we pay for love.

Around that time, a TV documentary showed a man in the Netherlands with Motor Neurone Disease discussing his fear of a terrible death and choosing euthanasia. A doctor from St Christopher’s Hospice in London was interviewed and said that good palliative care meant there was no need to fear death. Dad’s only fear was of being fed through a stomach tube. We talked about it. “You don’t have to have one,” I told him. “It’s your body and you can decide.” He asked me what would happen if he didn’t have one. “Well – of course eventually you will starve… but then you’re going to die anyway aren’t you?” I said, wondering at how matter-of-fact we were being. When the doctor arrived I left them alone together for half an hour. Dad was never tube-fed.

Dad’s brother Dennis was as close as a twin, and took it very hard. I remember him sobbing in my arms before going in and cheering dad up with silly jokes.

Dad died 3 months after diagnosis. It wasn’t an easy time but his humour never failed him. A few days before he died, he coughed and tried to say something, and I shushed him and held his head as he took 10 minutes to spit phlegm into a bucket by the bed. The effort had utterly exhausted him, and I was horrified at the thought that I might have missed his last words. He spent a further 10 minutes catching his breath, and then I asked him what he had been trying to say. Wearily he gestured at the bucket. “I were just thinking,” he gasped, “They should have me on Spitting Image!”

He had almost choked to death on one of his own terrible jokes. It would have been a fitting end for this wonderful man, but in the end he died peacefully on his second day in hospital. His last words were: “I’m feeling very happy.” This was not the awful, gasping, choking death we had feared. It was a peaceful acceptance, a moving on, and the priceless gift to me of the total loss of my fear of death.

Have you had a similar experience with your parent? Perhaps their death was different and worth telling our readers? Let us know.