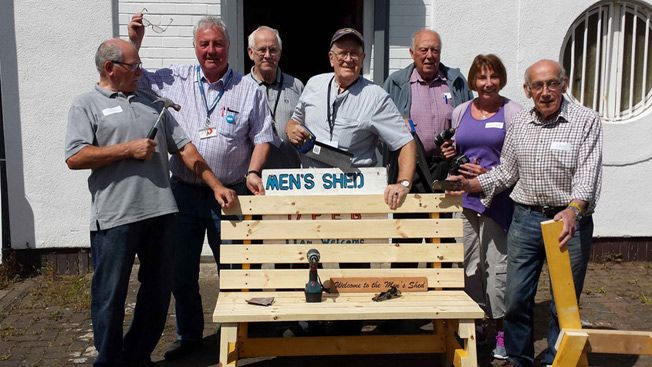 Workshop spaces where people can work side by side on personal and community projects are growing fast around the country. Men’s Sheds are a great opportunity to share and learn new skills, enjoy new achievements and make new friends.

What are Men’s Sheds?

Men’s Sheds, or Men in Sheds, are opening up at more than two a week across the UK. They are communal spaces where men (and sometimes women) gather to make friends as well as make things – anything from bird boxes to footbridges. They also meet up to mend and renovate, learn from each other and contribute to their communities.

These workshops are created to generate a supportive, safe and welcoming environment. They are not necessarily sheds. In Maldon in Essex the Shed is a former mortuary, while in Bristol the group uses a sports pavilion.

In Australia, the home of the Men’s Sheds, they are described as “half way between work and home”. As members of each Shed agree their own programme of activity, they vary greatly. Some members bring in their personal projects to get access to equipment, support and company, while others are more focused on group activity such as making items for re-sale or getting involved in community projects such as refurbishing play equipment.

But all Sheds have the overall aim of keeping men healthier and happier for longer by offering people greater purpose, a sense of achievement and opportunities for social interaction with each other and the wider community.

Men’s Sheds in the UK

Much of the learning behind the development of Men’s Sheds across the UK comes from Australia where there are close to 1,000 Sheds, up from 300 just four years ago. In Australia, 90% of Sheds have no paid staff. They are run entirely by the members.

In the UK, there are two broad models for getting Sheds started.

In a “hosted model” an agency may second staff and other resources, including premises, to bring would-be members together – exemplified by the Men in Sheds programme pioneered by Age UK.

The second and most common is the “bottom-up” model where a group of men come together and plan the development of a local Shed themselves. Moving this idea forward involves a lot of discussion locally, adopting a constitution, getting some funding and most difficult, finding premises.

Generally the tools required can be found from within the community and this whole approach can mean that volunteer–run Sheds can cost as little as £1500 to £8000 a year to run. Some Sheds move from being hosted to independence after a number of years.

The growth of Men’s Sheds in the UK

The UK Men’s Sheds Association (UKMSA) was formed in March 2013 to promote and support the development of Men’s Sheds. It connects interested individuals at the local level to seed the creation of new Sheds, advises new and existing Sheds and supports network development at regional and national levels. The UKMSA also aims to represent the interests of Men’s Sheds with national policy makers and influencers and raise their profile through the national media.

In May 2012 there were 12 sheds in existence in the UK. Three years later the number of planned and existing Sheds was over 220, having more than doubled during 2014/15. Shed memberships range from 10- 140 with an average of 20+. Most are open two or three days a week, some six days a week and others for just a few hours.

Who uses Sheds and why

In general, Sheds appeal to men at a certain age and stage in their lives – following unemployment or retirement for example – when they can feel disconnected particularly if their status and identity has been closely tied-up with their paid employment. This dislocation can also follow bereavement, divorce, family moving away or a move to a new home.

Bill (67) put his take on it this way “It gives me a reason to get up in the morning and for two days a week I feel I’m gainfully employed. I really feel good working with and helping chaps who often feel isolated in the community. I would need a very good reason not to come.”

For Ian his employment as a carpenter finished when he got throat cancer. Living alone and having to stop the pub life of heavy drinking and smoking he looked for an alternative. Now he comes to the Shed each week with some new idea or technique he has learned from the internet. He’s keen to explore his craft in new ways as well as advise others who don’t have his experience. “I love it, I really do” he says. “It’s the best thing that’s ever happened to me. Every day I do something different and the banter is worth its weight in gold.”

It isn’t always banter though and sometimes, over the workbench or the teapot, if trust is established the talk can go deeper even into health and relationships. In the Australian Sheds they recognise that men talk “shoulder-to-shoulder, not face-to-face”.

To find out more, go www.menssheds.org.uk (click on “maps” to find your nearest Men’s Shed) or if you’re interested in starting a Men’s Shed in your locality, contact [email protected]

Ten good reasons for older people to get into social media

Tips for enjoying the garden at any age

You can read the latest news and hear about new articles in our regular free newsletter. Sign up by joining the family below.