Dad, dementia and connecting through art 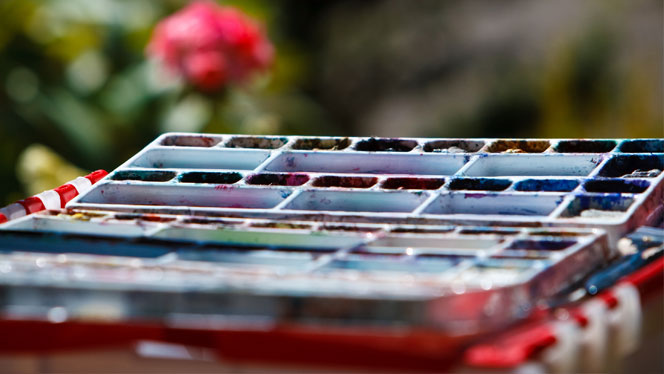 This week’s storyteller is Ro Lavender.

Ro tells us how watercolour painting brought her closer again to her father, Peter Scott, after advancing dementia had caused a collapse in communication between them.

My dad was an architect and a very capable and independent individual. He was a practical man who always had a solution to every problem. It’s been a gradual process of realising that what he was has changed. It wasn’t like an accident or a heart attack or a stroke, where one minute he’s fine and suddenly he’s disabled. His dementia has been very insidious.

One of the early signs was my mother’s observation that dinner was never on time. Dad had given up his time-honoured habit of laying the dinner table the night before. He bizarrely started to forget my birthday. When my parents moved house I noticed that he had packed his drills in with the bedding and I reasoned at the time that it was just stress. He started complaining about people and things. He said the microwave was stupid but actually he couldn’t make sense of how to work it. Again I thought his behaviour was odd but never did I suspect dementia.

Just before Christmas he fell in the early hours and was taken to hospital. It was after that that he received a diagnosis. They score dementia out of 10 (where 10 is completely normal) and dad received a 2.

I realised then that dad had become an expert at covering up his own limitations. Even though I have experience in nursing it was almost like I couldn’t see what was before my eyes because I wasn’t expecting it.

When Dad was in hospital I didn’t want my visits to become a round of questions about bowel movements and pain management or complaints to staff about missed meals. Dad’s not a great talker and what do you talk about when someone is confused and in hospital? I couldn’t ask questions because he didn’t remember the answers. Sometimes he wouldn’t even remember me.

So I took some watercolour paint in one day, gave him a brush and asked him to choose a picture to copy. And he did.

I had felt that I was losing dad down this dementia tunnel. It was just getting darker and there seemed to be less and less of a connection between us. I wanted that back. For the last phase of dad’s life he deserved communication. Painting together has helped this to happen.

We don’t paint on a regular basis as he’s not always in the right mood. When he is, I’ll suggest doing a quick painting because I know he’ll enjoy it in that moment. Whether or not he remembers what he’s done, our painting together has an impact on how we journey through this challenge. It’s something tangible that we’ve both shared in creating. This has a greater impact than if you ask someone to do something by themselves.

I provide dad with clearly defined pictures of flowers and ask him to choose one he likes. Giving him a choice means he’s actively engaged in what he’s doing. Dad does the drawing and we talk about the colour he wants. I tend to mix the paint and he applies it. 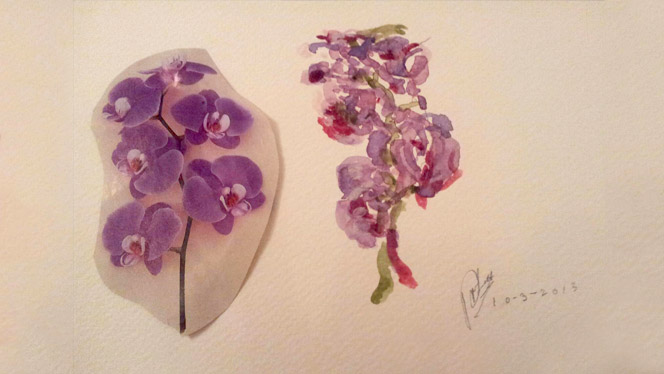 Dad’s possessive about his work. He often says to me “I think you’ll find it’s my work” if I try to suggest a particular approach. He’s still there. He assumes this manner of “Don’t mess with me, I’m your father, and I know exactly what I’m doing”. It makes me laugh because even though he’s in this diminished state he’s still powerful. I like that.

It’s very boring having dementia because people restrict your world. After dad’s stint in hospital I arranged carers for him, but he said I’d given him minders – prison officers even. He knows he’s being restricted but he hasn’t the capability to manage anything for himself. It’s hard. I’d ask “Do you know who I am?” and he’d answer “You’re the one who comes and goes and asks an awful lot of questions”. You do panic and think oh my goodness this is my dad and he doesn’t know who I am!

You just can’t take things like that personally – I think that’s crucial. I know from experience that this is easier said than done. I believe though that getting overly emotional in the wrong way is actually a waste of energy.

What I want people to understand most is that there can be hope in challenging times. It isn’t easy and you will often feel the sadness and the loss of what your parent used to be like.

At the same time there are many positive things that you can do. They do say that the frontal lobe of the brain, the creative part, is the last to go. Just keeping this in mind has helped me to realise that there’s always more potential, that the brain is capable of remarkable things given the right environment for your parent.

If you’re interested in the impact of art on dementia Ro recommends the Hilgos Foundation, a US charity that supports the on-going process of artistic creation with people who have memory problems. The UK based charity Arts 4 Dementia is also worth a look. Its mission is to develop intergenerational arts opportunities for people living with dementia to bring inspirational relief from anxiety and confusion.