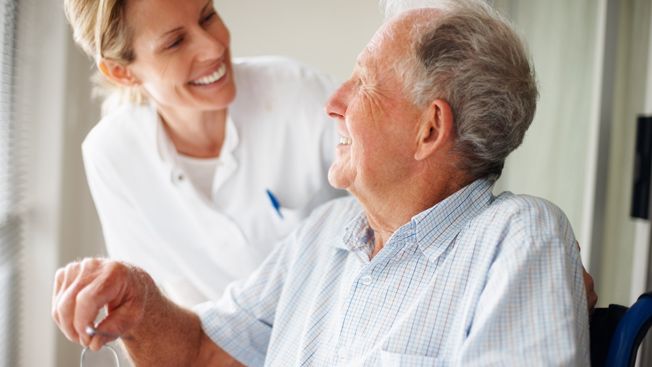 As a full-time Project Manager at the Met Office, Mary Sherwood was inspired by Radio Devon’s commitment to make Devon a dementia-friendly county. This is how she worked with her employer to create an office that supported working carers of people living with dementia, and how she is spreading the word to other organisations around the country.

Dementia is a growing problem and increasing numbers of working people are attempting to care for family with dementia. These carers are often hidden to employers and colleagues. I wanted to recognise, understand and support them.

Having cared for my mother who had vascular dementia, I knew how hard it is to work whilst caring for a person with dementia. Good work/carer/life balance is challenged. The sense of isolation and the effect on performance and health is significant, but dementia carers think they won’t be understood or that they will be adversely affected due to the stigma of dementia.

My idea was to make the Met Office where I worked a Dementia Carer Friendly workplace. This new model of Dementia Friendly focuses on the carers and trying to improve their work/carer/life balance.

My plan was accepted by the Met Office’s “Idea Street” for innovative change and I readily agreed to drive the project. The intended outcome was:

I requested appropriate training so that I could help staff to understand dementia whilst informing and supporting carers. Becoming a Dementia Friends Champion was perfect.

Supported by my union, Prospect, I also undertook a Principles of Dementia Care level 2 distance learning course through Tribal, knowing it would provide valuable input for the Dementia Carer Network Group that I had set up. It was exceptionally well run by Tribal – support and help when needed and very educational. My initiative inspired the Trade Union Congress (TUC) which created a case study, distributed nationally.

Membership of the group is very broad. It can be:

The Dementia Carer Network group has approximately 40 members which is steadily growing and evolving as current carers become former carers. Members email one another for advice and support outside of the meetings.

Twelve members are Carer Buddies, who can meet up with a carer for a coffee and chat when needed. They have also provided unique insight from their expert experience into what stresses carers, as well as where there is help available and its value.

Individuals are still plucking up the courage to engage over one year on and I receive regular news or research updates on dementia from colleagues in the form of emails or newspaper cuttings. Feedback has been very positive from colleagues across the organisation. I add this and other information to the internal Dementia Carers Twiki and created an internal email address to manage Dementia Carer Network communications.

Issues and lessons captured have prompted changes in work processes.

In one case a member’s sudden need to go abroad at very short notice to organise her mother into a care home prompted discussion around line management consistency for colleagues in a similar position. A proposal was put to the Executive Board to encourage line managers to attend the Dementia Friends sessions. Leading from the front by becoming Dementia Friends, they have fully supported the initiative. Members of the Executive have volunteered that this has also influenced their increased awareness and understanding of other care-related issues. This has led to a proposal for a consistent approach that allows carers up to five days special paid leave for dealing with an emergency.

Recognising that some find it difficult to be in a group, a trial drop-in session proved very successful and has been repeated.

We discovered that just having or having had a dementia experience opened the door to effective communication, regardless of nature or timespan.

Discussions about our model with an IBM representative revealed that they hold virtual coffee meetings on the phone for their disability group. This is something we are now trialling. I have been invited to discuss our model at their November 2015 meeting.

A simple model that works

The model is simple, but it is also unique in recognising and supporting hidden working dementia carers. Organisations adopting this model will lose fewer skilled staff who are expensive and time-consuming to replace.

The pride in belonging to an organisation which values individuals and supports them when they need it most is felt by all, not just the carers.

Feedback from carers is that because the subject is no longer taboo, they can talk about it more freely and do not feel isolated or alone. They feel that if others can cope then so can they – with the support of colleagues.

Spreading the model to other businesses

My involvement in the newly forming Exeter Dementia Action Alliance as Dementia Carer Workplace Lead has led to the Met Office becoming a member and other organisations wanting to learn about our model.

The HR director of Stephens Scown, a local firm of solicitors, wanted to learn about the pilot and how it could be adapted to their organisation. I was asked if I would mentor them. Adapting the model to suit their culture, geography and size, they are now creating a Carer Network. A new relationship is building – they have provided talks on Lasting Power of Attorney and monthly drop in sessions for all Met Office colleagues. We are supporting one another going forwards.

A Lessons Learned workshop identified the benefits to network group members and other staff so far and capture feedback for improvements going forwards. I used the evidence from this exercise in a presentation at APMG Showcase (Timeslot 2) in Westminster entitled “Building a dementia carer friendly workplace; a new model”. My model also supports the Prime Minister’s Dementia Challenge 2020.

I would like to create accreditation for organisations to become Dementia Carer Friendly. I raised this as a delegate forum question at the recent Dementia Challenge 2015 conference in London. Sara Wilcox, CEO at Pathways Through Dementia and panel member mentioned me in her blog. Sara was particularly interested in the benefits to the organisation, such as increased performance, willingness of staff to give discretionary effort and inclusiveness, as well as the less obvious benefit to all staff who feel they are working for an organisation which has a heart. Organisations being Dementia Carer Friendly has global implications, but I will be happy to start with UK!

I have used high profile communication from the outset to draw attention to the issue and to progress of the Met Office pilot study.

You can find out more and offer feedback on Mary’s website www.dementiacarerfriendly.com which encourages other organisations to become dementia carer friendly and through her Twitter account @4dementiacarers.

This article was created in November 2015.

If you’d like to read more around dementia care, try our articles on

You can also download our free guide on the legal, financial and emotional aspects of supporting someone living with dementia.

For notification of new articles simply join the family to receive our free newsletter. Just click on the box below.